Over a year ago I had a desire to create something. I wanted to build a product that I could hold, that I could share with people and nurture as a side project. Being very active in the Leeds nightlife scene and hosting pre drinks several times a month, I was exposed to a wide array of complicated and weak drinking games. These factors meant I naturally fell in to creating a drinking game that was simple, easy to play and could build a strong vibe for a night out.

I always liked the type of pre drinking games that involved a selection of different ways for someone to drink like ‘Ring of Fire’, although there were only around a dozen different card options and the rules were often different depending on the group you were with. Most student flats would have their own ‘Ring of Fire’ rules sheet somewhere in the front room; usefully stained brown from Jäger.

I had a problem to solve and a direction to head in. I spent a bit of time everyday thinking of creative ways that people could be selected to drink, or little mini games a group of people could do to build social vibe and break the ice. Initially I think some of the cards were too complicated for example the “Half-life delegation card” which read:

“Pick a person; they must down half their beverage. Then refill drink. (The half life’d player can now request one additional person to down a ¼ of their drink and so on until sips become impossible.”

Even though this was a cool unique selector to pick people to drink it soon became apparent that a major theme of my game was its simplicity, therefore cards like these were naturally simplified so to keep true to the games purpose.

The first prototype of the game was made using Microsoft Excel. A grid of all the cards were arranged, printed and cut on paper creating the first ever printed version of the game. This game was tested with a close group of friends on New Year’s Eve 2014 and went down an absolute storm, contributing to one of the best nights out of the year. The next step in the realisation of Precarious was to stick the bits of paper for each ‘card’ to old train tickets that I had saved up over many months. 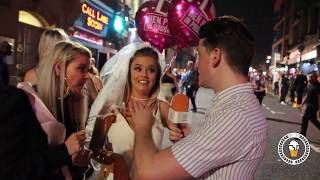